We recently published our analysis of whole-genome sequencing data from Streptococcus pneumoniae serotype 3 isolates in Plos Pathogens. This work was the result of collaboration with the Global Pneumococcal Sequencing (GPS) Project, which aims at sequencing a globally representative sample of pneumococcal isolates specifically from undersampled regions of the world. The list of GPS collaborators is a whos-who of pneumococcal experts, as reflected by the amazing list of co-authors on the publication. What initially piqued our interest in serotype 3 was the observation of a divergent lineage of multi-locus sequence type 180 that emerged among Massachusetts’s children after the introduction of the 13-valent pneumococcal conjugate vaccine. Our initial question was whether the vaccine somehow precipitated this change in population structure and subsequently expanded to a broader question: what’s the deal with serotype 3?

Serotype 3 is a vaccine serotype included in the current conjugate vaccine (PCV13) administered to children in the US and several other countries (If you want to know which countries, check out here). Despite its inclusion in the vaccine, little impact has been observed in terms of the rate of invasive pneumococcal disease in the US (based on CDC ABC data). Overall, there are mixed results regarding the efficacy of PCV13 against serotype 3 carriage and disease. Nonetheless, it is evident that the vaccine’s efficacy toward this ‘odd’ serotype is less than the other 12 targeted by the vaccine. I say ‘odd’ because serotype 3 is an outlier in almost all comparative studies of pneumococcal serotypes; it grows as a mucoid colony, sheds its capsule seemingly as a defense against phagocytosis, and has a highly negatively charged capsule. Our analysis included phylogenetic and population dynamic analysis by yours truly as well as laboratory studies by the talented Maria Georgieva and Claudette Thompson. We attempted to run down every possible contributor to the change in population structure. In the end, what stood out was that the emerging clade (referred to as Clade II in the publication) was divergent in its profile of pneumococcal protein antigen variants, the result of multiple recombination events, and more importantly, a large proportion of Clade II isolate had acquired a Tn916 transposon that conferred resistance to macrolide, clindamycin, and tetracycline. Our leading theory is that PCV13’s disruption of the pneumococcal population left a vacant niche that Clade II was primed to fill.

Interestingly, the question came up during the review process whether Clade II was actually “emerging”. Based on the data presented in the study, which spanned isolates collected from 1993 to 2014, it appeared that Clade II was set to supplant the resident serotype 3 population in the US. Around the time the manuscript was being routed through review, I began analyzing data from 2,316 invasive pneumococcal isolates collected during 2015 through CDC’s Active Bacterial Core surveillance ‘for fun’ (dataset described here). I decided to take a look at the serotype 3 population in that sample and determine the proportion belonging to each clade. These results never made it into the published manuscript, but I felt it is worth sharing them. Based on the sample that I analyzed, 226 ABC isolates from 2015 were ST180 (I think the official CDC count is 295). Below are two side-by-side phylogenies. The one on the left is adapted from Figure 5 in the published manuscript. It represents a global phylogeny of 301 isolates. The phylogeny on the right is inferred from 226 serotype 3 isolates from the 2015 CDC ABC sample. The orange highlighted clade in both phylogenies is Clade II, which in 2015 comprised 55.3% of serotype 3 invasive isolates in the US. The numbers in 2016 (care of my collaborators at CDC) are 177/314 (56.4%) belonging to Clade II. You can see more of that work here. What’s interesting is that the sub-clades of Clade II are even more pronounced in the CDC invasive disease sample.

So Clade II is definitely making moves. The concern, of course, is that a large proportion of these isolates are antibiotic resistant. Certainly, there is a lot more work to be done regarding the epidemiology of this emerging clade. In our recent publication, we didn’t really get into epidemiological differences between those infected/colonized with each clade. One could look at differences in demographics, risk factors, or even clinical outcomes. Also, a large question remains about a possible difference in carriage duration. Regarding the genomics, structural variation in the capsule warrants further exploration as well as differences in transcriptomes. In the end, while we didn’t find the smoking gun explaining why serotype 3 is so different, we did run down a number of leads, generate more hypotheses, and come up with a working theory about why this shift in population structure is occurring. Stay tuned for more! 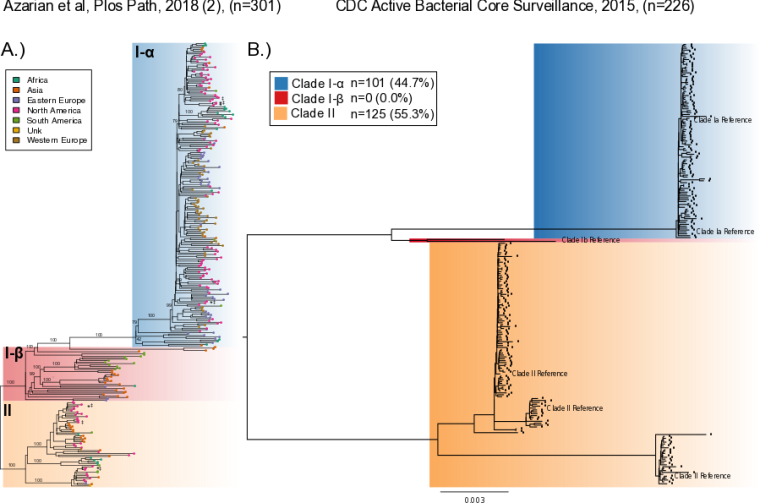